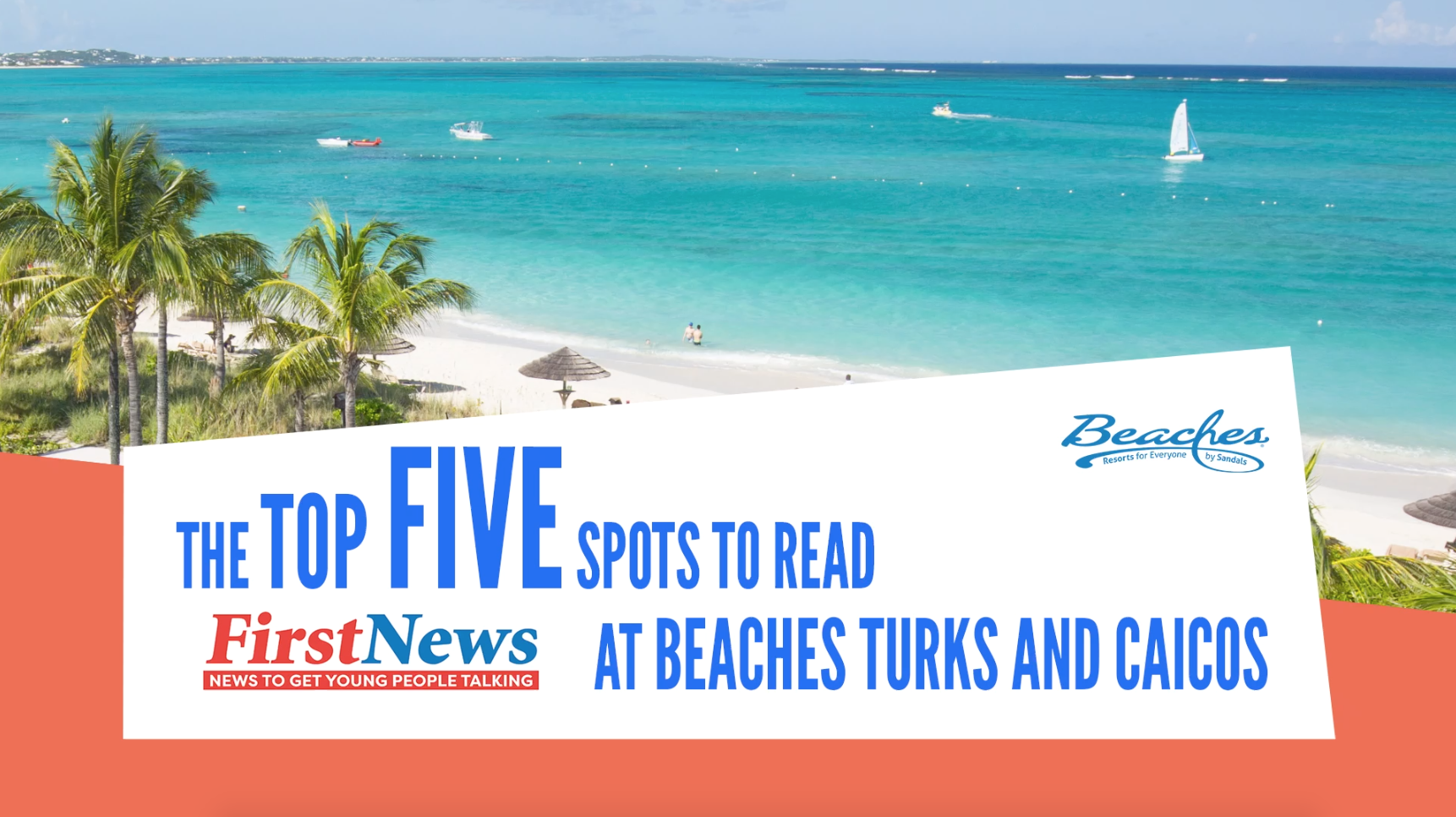 FEBRUARY is a good time to start thinking about holidays! Just a few weeks ago, we were invited to go on a once-in-a-lifetime trip to the Turks and Caicos islands. This isn’t something you get to do every year, so after thinking about it for two seconds, we packed our bags and hopped on the first flight to the islands, which, if you’re wondering, are between the Bahamas and the Dominican Republic.

We had a great time – and it turns out, there are some GREAT spots to do a bit of catching-up with the news. So check out the video above, which run down the top spots for First News reading on the island!

While there, we also spoke to Fedeline Julien, the Children’s Activities Manager at Beaches Turks and Caicos Resort Villages & Spa, to find out what goes on at the resort.

Tell me about your role at Beaches Turks and Caicos?

I work as a Children’s Activities Manager at a hotel called Beaches Turks & Caicos, which is in the Caribbean.  I oversee the running of the children’s activities at the Kids’ Camp, which is designed for our younger guests. My job includes checking children in and out of the camps every day, ensuring that activities like painting and baking are set up correctly and making sure that our Sesame Street Walk Around Characters like Julia, Sesame Street’s first autistic character, are ready for the day ahead.

What kinds of entertainment programmes are on at the resort?

Beaches Turks & Caicos offers endless activities for guests of all ages to enjoy, through our partnership with Sesame Street it’s possible to try anything from baking with the Cookie Monster to Story Time with Elmo. We also have our own waterpark called Pirate Island, an Xbox Play Lounge and daily kids’ camps. Last year we launched “Voilà”, a series of live cinematic evening entertainment shows which take place throughout the week including The Jungle Book, Alice in Wonderland and Treasure Island. We also have a nursery for really young children. For teenagers, we have a teen nightclub called Liquid, and a lounge where they can hang out without mum and dad.

Can you tell me about your favourite show here?

My favourite show at Beaches Turks & Caicos has to be Alice in Wonderland. The book was one of my favourites as a child, so it is magical to see it come to life. The audience is transported to an enchanted world where they follow Alice’s adventures, meeting familiar faces like the Cheshire Cat and the Queen of Hearts. The show is also really interactive and gives children a chance to get up on stage which is always popular!

Do you have any funny stories about working as a Children’s Activities Manager at the resort?

As Children’s Activities Manager, you do have a lot of funny stories! It’s part of the job. When working with children, there is never a dull moment. Some of the funniest moments are with Cookie Monster, it is a delight to see children trying to feed him chocolate chips (one of our ‘sometimes’ food) and he encourages them to eat their broccoli (one of our ‘everyday’ foods). Each time the children scream with laughter during his baking activities, Cookie Monster does his happy dance which brings so much joy and laughter to the faces of the children, parents and the Camp Counsellors!

There’s lots of audience participation at the shows – has anyone ever done anything crazy?

We’ve had one or two children who join us on stage during the shows and seem shy, but when they’re asked to take part in a challenge they have surprised everyone with their amazing confidence. For example, we have a show where there’s a dance-off and everyone is asked to show off their best dance moves. A little girl who had been in the kids’ camp for a week but was very quiet suddenly brought out these amazing moves on stage, it was such a shock and brilliant to see!

not home sweet not home