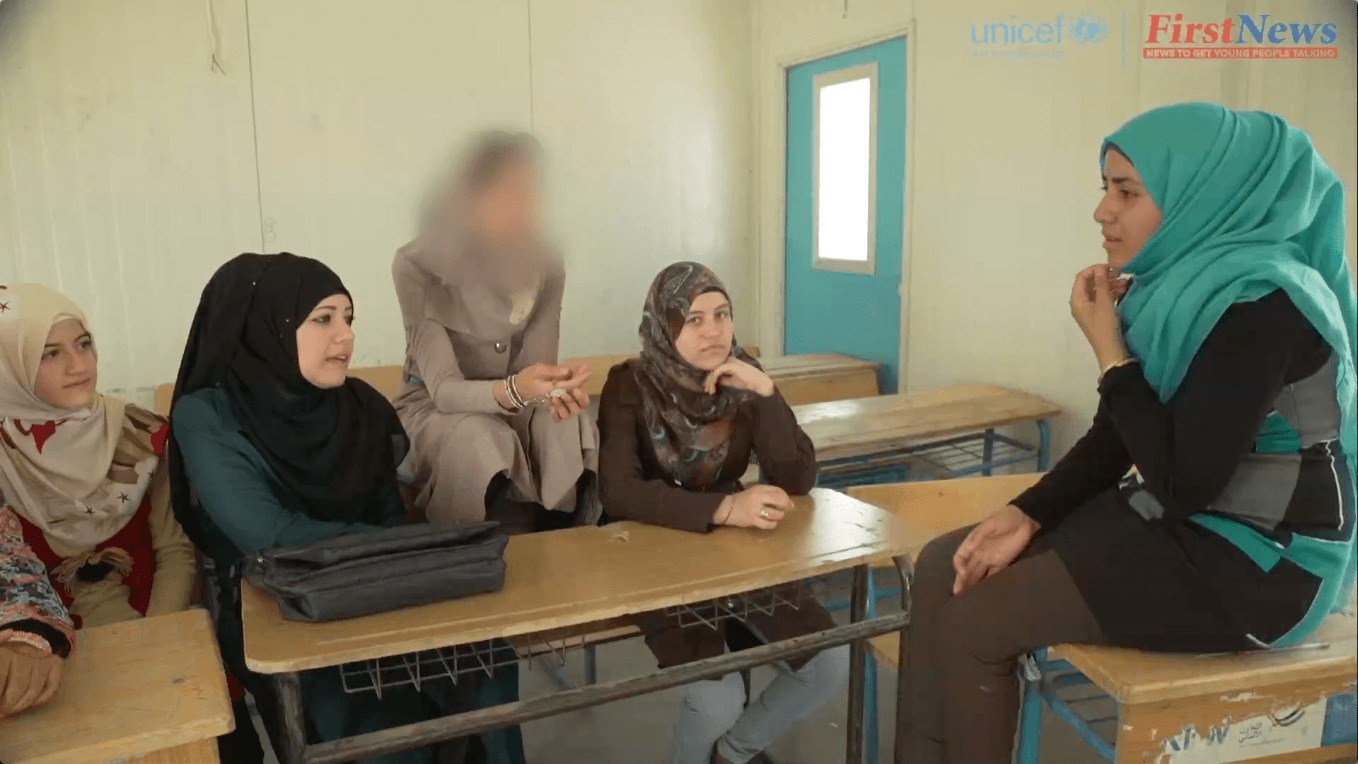 We meet the refugee girls who fled with their families from Syria to the Zaatari refugee camp in neighbouring Jordan. Many are being forced to marry very young by their parents who believe an older husband will take better care of them.

Omaymah is 15 years old and lives in Zaatari refugee camp in Jordan. Her family fled from their home in Syria four years ago when it was no longer safe to stay. Omaymah studies hard and wants to be a human rights lawyer.

Omaymah says: “I love school, my favourite subject is English. A girl’s weapon is education and she shouldn’t leave. If she leaves she won’t have a weapon to defend herself in the future. Men can work with whatever they want but girls can’t, that’s why the degree is every girl’s weapon.

“I used to come home from school, get changed, and then go around the caravans and houses advising the girls who don’t go to school that they should go to school and warn them about the dangers of early marriage. If her parents don’t allow it, we try talking to the parents, too.

“When a girl gets married at an early age, she won’t have a chance to get an education. She will be deprived from her friends at school, she will see girls her age go to school but she won’t. It will affect her.

“Early marriage takes her opportunity to learn and live away. I remember once that a friend of mine, her name was Esraa, was forced to get married. We didn’t see her again after that.”

Please show your support for ending child marriage by helping to spread the word.

Have your say in the comments below

why would anyone want to get married that young, I am 14 and I would not get married even if I thought it would help my family or keep me safe, marriage is about love not putting food on the table! These girls need to stand up for themselves. Is child marriage illegal? Can someone respond?

Hi, I don't know if it is illegal but something has been done to stop it?
They should be able to say no!!!
They should make robots and make people marry them, that should work for a bit.
From Charlie

I can't believe that girls as young as 12 are forced to marry just for money! To marry someone is to live with them because they care for each other, not to be hit by each other!! Is child marriage even legal?

girls defo need to stand up for themselves!
i agree sarawalter.

this is very bad people have to put a stop to this and why are the girls forced to marry when their below 15 or 16.

That does not sound right, child marriage.
It also doesn't sound LEGAL.

I think child marriage is wrong something needs to happen about this. I think it needs to stop. Marriage should be about love and them marrying an older man won't really help anyone. #endchildmarriage

This violates millions of girls' human rights a hundred times over! Like Omaymah said, early marriage takes a girl's chance to live and learn away.
I wish this all would JUST STOP. There's enough negativity in the world already.
It's HORRENDOUS.
#endchildmarriage

This is awful and needs to be sorted out