I Don’t Get It episode 5 – Refugees: is there still a crisis? 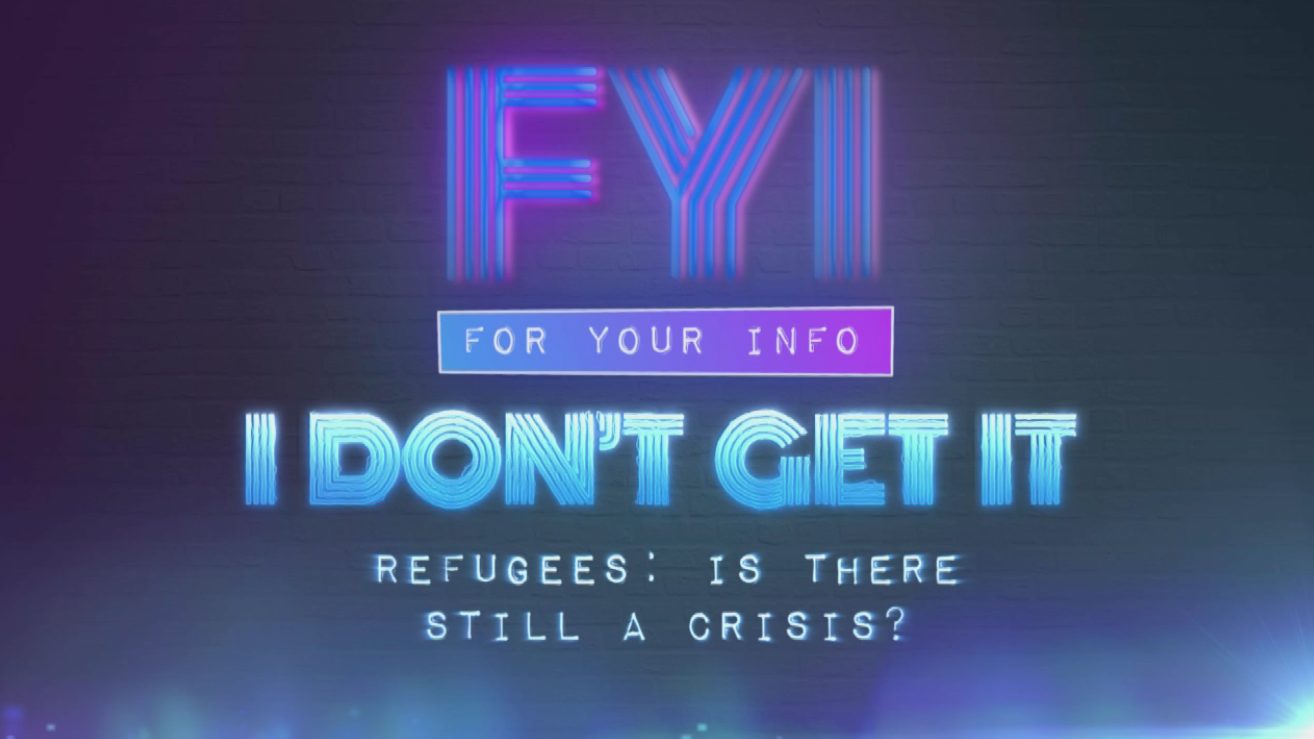 All over the world, millions of people are having to flee their homes, just to find a safe place to live. Sky Kids FYI presenter Declan explores the reasons why this is happening and just how big the problem is.

You know what they say: ‘There’s no place like home”? But imagine, just for a moment, that your home was no longer safe and you had to live in a refugee camp instead. It could be because of a war, or because your family has been badly treated because of your religious beliefs.

When this happens and families are forced to leave home to seek shelter in a different country, they become refugees.

How many refugees are there?

It’s a huge problem. Currently there are 26 million refugees across the world, and more than 11 million of them are children. It’s the biggest mass movement of people since the Second World War, when millions of people fled their homes to find somewhere safe to live.

In fact the United Nations says that every minute of every day an average of 25 people are forced to flee their homes.

Where in the world is this happening?

Two out of every three refugees come from just five countries. they are placed where there have been terrible conflicts and lots of people have been killed: Syria, Afghanistan, South Sudan, Myanmar and Somalia. So, where do all those refugees go? Well, most of them end up in either Turkey (3.7 million), Pakistan (1.4 million) or Uganda (1.2 million), countries right next to where they came from.

Most refugees live in urban areas or refugee camps, where the conditions can be cramped and overcrowded. Some refugee camps are as big as cities, but not many of them have schools or hospitals. Very often, people stay as refugees for decades, until it’s safe to return home.

Do we have many refugees in the UK?

The UK has a proud history of providing people with a safe place to live, when they’re under threat of violence in their own country.

This was especially true just before the Second World War, when thousands of Jewish people were given refuge here after fleeing the Nazis in Germany. But since then the UK has been criticised for not helping enough refugees. According to the Government, the UK currently has 126,720 refugees. That’s a much smaller number than some other European countries, like Germany, wit more than a million, and France and Sweden.

Why don’t we do more to help refugees?

Well, not everyone wants more foreign people living in our communities, and some newspapers have campaigned to limit the number of people our government allows to come and live here. some people believe we already have too many refugees living in the UK, and there isn’t enough space for anyone else. they worry that there aren’t enough houses, hospitals and schools to cope with the increasing number of refugees.

But other people think it’s our duty to do what ever we can to help people who have lost their homes and jobs through no fault of their own. they say refugees should be made welcome here, and given our support to rebuild their lives.

Whatever you think, there still hundreds of people who risk their lives to come to Britain ever year. Sometime they’re smuggled into the country hidden in lorries, or they try to cross the English Channel in small boats.

Some refugees and their children have go on to settle here and become very successful. they include the singer Rita Ora, the politician Ed Milliband and businessman Michael Marks, who created Marks & Spencer.

But if you need a reminder about the scale of the problem, then how about this? Just in the time you have been reading this or watching the video, about 100 people somewhere n the world will have been forced to flee their homes.