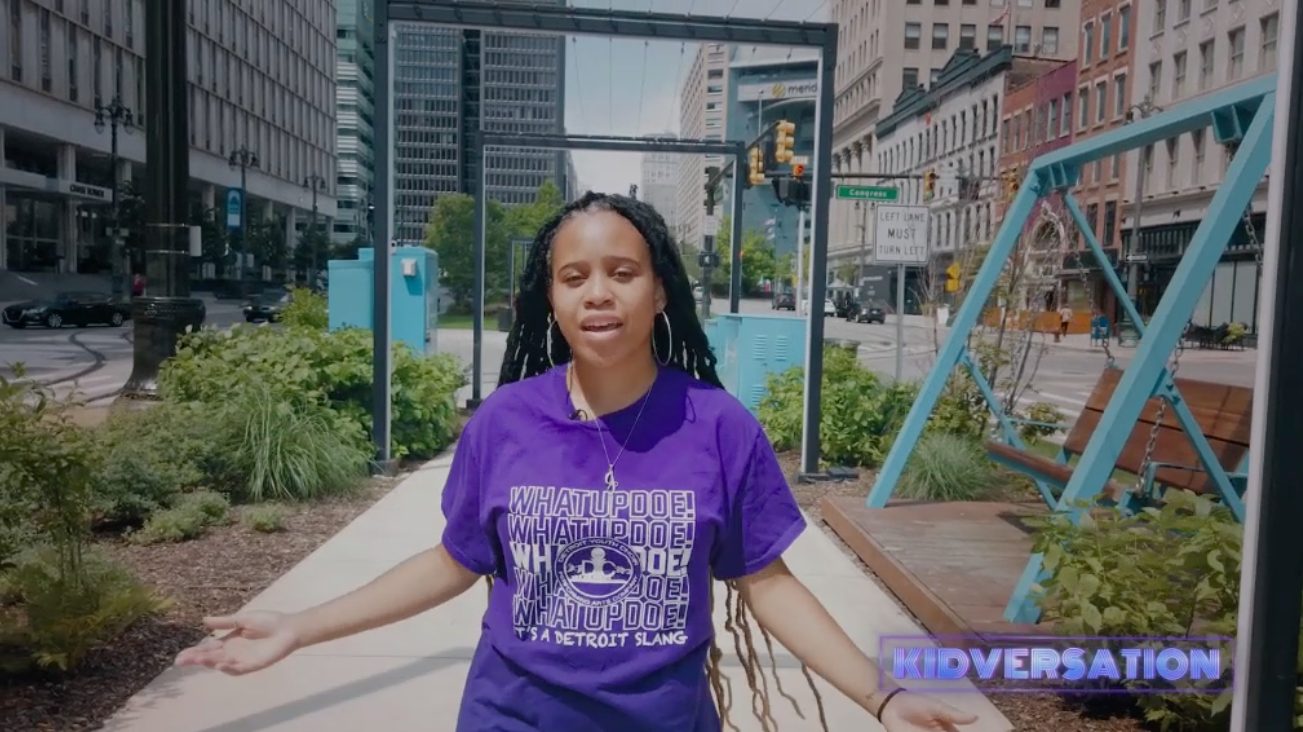 Article 2 of the The United Nations Convention on the Rights of the Child says: “The Convention applies to every child without discrimination, whatever their ethnicity, sex, religion, language, abilities or any other status, whatever they think or say, whatever their family background.”

Jayla: Hi, my name is Jayla, and I have the right not to be discriminated against because of the colour of my skin.

Jayla, also known by her rap name Indigo Yaj, is an American singer and rapper. She uses her songs to talk about injustice towards black people. I’ve come to Detroit to meet Jayla, and I caught up with her in the studio, where she was recording her latest song.

Jayla: Basically how I go about it, is I listen to the beat, and then start writing.
DECLAN: So you don’t make a beat to match the lyrics, you make the lyrics to match the beat?
Jayla: Yeah. It starts out just as story-telling, then when you put music with words, that’s when it becomes a song.

DECLAN: What first inspired you to write raps about racism?
Jayla: Because music is a big thing in my community – just because of the way they see celebrities using music videos. I definitely thought about doing the same thing with racism, because if you don’t do something about it, what makes you think anything is going to happen?

DECLAN: With being discriminated against, does the songwriting and rapping help you blow off some steam about it?
Jayla: It definitely does – it helps to process the feelings that we have. I try to make it an emotional tie with all my songs because if you can’t relate to it, what’s the purpose of me writing it? And it definitely calms me down.

Growing up in the States, Jayla’s been bombarded with upsetting news reports of black people killed in controversial circumstances.

Jayla: It kind of takes a toll on you to know that history is constantly repeating itself, even today.

In September it was announced that no police officers would face murder charges for the shooting of 26-year-old Breonna Taylor during a raid on her home. It’s a case close to Jayla’s heart.

Jayla: One of my close friends, her cousin was actually Breonna Taylor. To have seen the whole Black Lives Matter movement come up and to see how close to home it can be, and how much it can affect us, is just something that you can’t be silent about.

Detroit has one of the largest black populations in the country, almost four-fifths African-American. But Jayla says they still don’t learn enough about black history at school.

Jayla: I think it’s so crazy, you know, how we’ll learn about the start of our country, like branching off from the British. But every State doesn’t get their own local history within it, especially when it comes to the whole racial tension issue, especially with things going on now. And for that to be purposely erased from our history, I feel like it should definitely be required to learn about it.

Jayla’s journey as a rapper began as part of the Detroit Youth Choir. She got spotted by their inspirational director, Anthony White.

Jayla: I was kind of shy about it at first, because there were not so many female rappers around when I started rapping, actually. We had an event in the basement of a church, and our director, Mr White, he decided to let me do one of my own pieces there, and that’s what kind of just sparked it off.

In 2019, the Detroit Youth Choir appeared on America’s Got Talent.

ANTHONY: We have a lot of inner city kids, some of them have bad home situations or they could be on the streets, and there’s violence. We give them something positive to come and be a part of.

Jayla rapped on their version of ‘Can’t Hold Us’ and it raised the roof! they were eventually runners-up in the whole competition.

When the killing of George Floyd happened in May 2020, the Detroit Youth Choir was now famous, and had a powerful voice. Their recording of John Legend and Common’s song ‘Glory’ summed up what so many people were feeling. Once again, Jayla wrote a new verse for the song. The protest quickly spread across the globe, and it seemed the world was finally saying ‘enough is enough’.

Jayla: Some things that haven’t been talked about in a while are sparking off now, so things can definitely change.

Jayla told me her latest song ‘Behind The Mask’ aims to help heal rifts between police and black people.

Jayla: For the concept of the song, because of the fact that police officers have masks and we have masks, the whole concept has to say that we’re choosing sides, but to reflect on everything that’s happening, so basically just a call to action, you know, that something needs to change. I’m gonna try it out, then let me know if you like it!

Jayla: Our generation plays a really big part in getting the coverage that it has. Because if we weren’t to talk about it, who’s to know how George Floyd would have been put on a pedestal, or who’s to know that Breonna Taylor would be getting the coverage she’s getting now. There are a lot of things that we think about but nobody really has the confidence to say, and I definitely want to to be that person, to be outspoken and say it.