Children have the right to seek refuge in another country 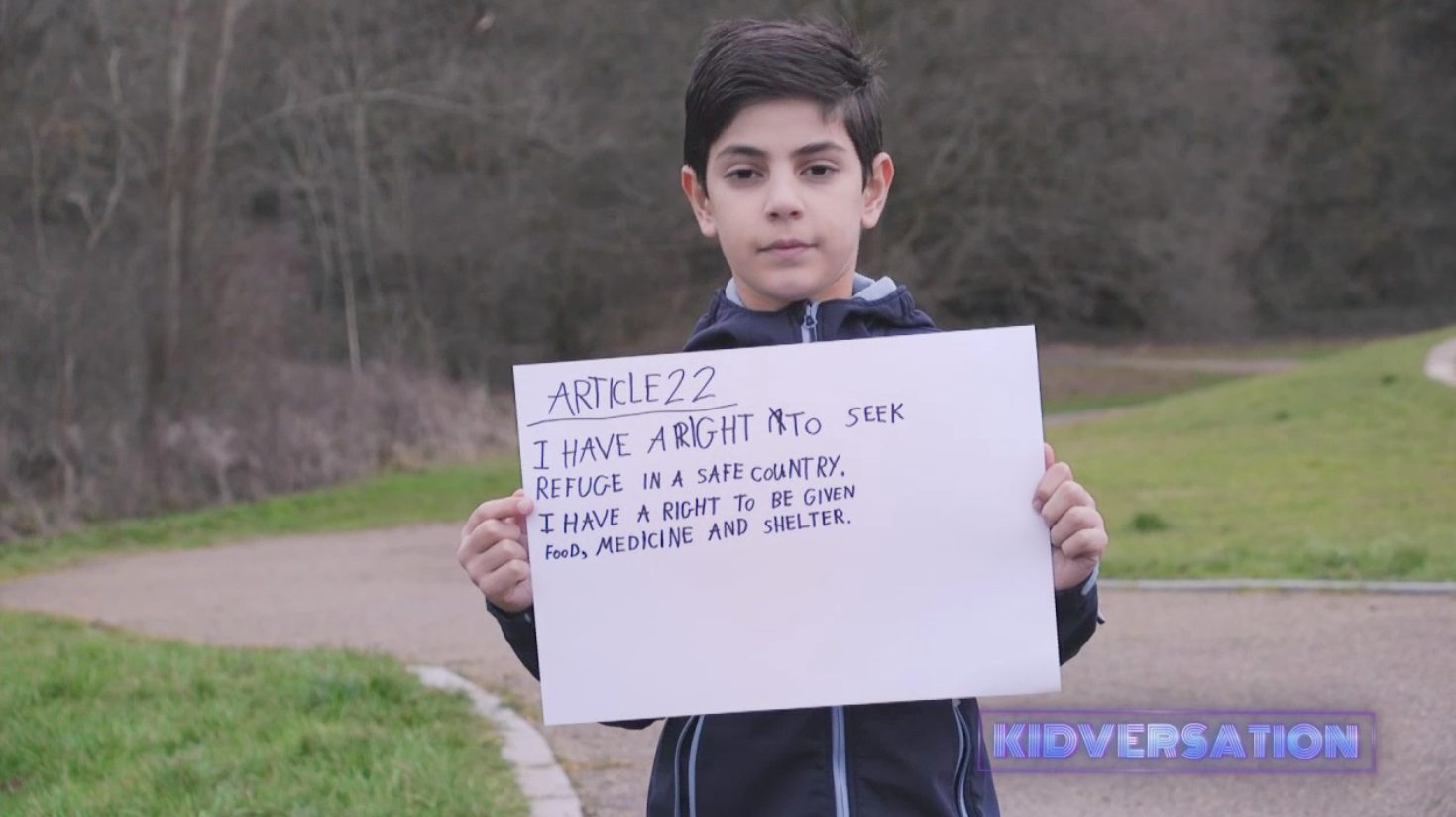 ARVIN: Hello, my name is Arvin, I’m from Iran and I am a refugee.

Arvin and his friends have been living with their families in tents in a field on the French coast for months. They fled war, violence or poverty in their country. Millions of refugees and migrants have arrived in Europe hoping to be offered a new life, but countries say they’re overwhelmed and many are forced to move on. Hundreds end up here, the dangerous waters of the English Channel are all that lies between them and their last hope of a new life, the UK. And it’s here I met Arvin and his family. They’re planning to make that dangerous journey any day soon.

ARCHIE: Are you planning to go to the UK?
ARVIN: Yes.

ARCHIE: How do you think you are going to try and get there?
ARVIN: By boat.

ARCHIE: Arvin and his family claim their lives were in danger in their home country, Iran. After months of travelling across Europe, crossing seas and mountains with the help of people smugglers, they ended up in Dunkirk on the French coast. That’s where I met Arvin.
ARVIN: The problem is it’s very cold here. My brother is ill, there’s no help for my brother, no doctor. He has autism and epilepsy.

Since the end of 2019 record numbers of migrants who are seeking a better life or refugees who are fleeing war or violence are being picked up in the English Channel in small boats. Some also hide in lorries on ferries. All of them claiming they can’t go back to their homeland. Arvin’s family are determined to cross the English Channel and seek help from the British Government. The UK coast is just a few miles away. All of them hope to get there by paying people smugglers.

ARCHIE: Are you scared of going to England a little bit?
ARVIN: Yes, I’m afraid because the sea is very big and I’m afraid the boat will crash. I don’t know how to swim.

ARCHIE: So is it really worth that risk, that danger?
ARVIN: No, but we don’t have a choice.

A few weeks later I was presenting on FYI as we reported on one of the largest attempted crossings made by refugees and migrants from France to the English coast. Little did I know at the time that Arvin and his family were on board one of the five boats stopped by the British Coast Guard.

ARCHIE: I’m about to meet Arvin. It’s absolutely insane that he’s come over to the UK in a boat. I just cannot imagine enduring those kinds of conditions.
ARVIN: Hey. Hi.

He seems completely different, just happier. For now Arvin and his family are allowed to stay in the UK. I wanted to know more about his dangerous journey across the English channel and I dug out some news footage to help him explain it to me.

ARCHIE: Was it night time, so like this or was it bright.
ARVIN: Like this, like this, yeah.
ARCHIE: Like this. Were you in one of these or was it bigger?
ARVIN: Bigger.
ARCHIE: Bigger, yeah.
ARVIN: It was so windy and the waves were so big. The water came into our boat. I got wet because of the waves.
ARCHIE: So, your feet were in the, in the boat, in the boat there was water?
ARVIN: Yeah, yeah. The water came up to here.
ARCHIE: Oh man. Ahh, what!
ARVIN: It was scary and it was so cold I thought I was going to die.

ARCHIE: It seems like Arvin’s integrated really well. I mean he’s made loads of friends inside and outside of school.

It looks like hanging out at his mate’s house is just a normal weekend for him. I even got treated to some traditional Persian dishes Arvin’s mum brought round.

For now the British authorities have given the family a place to live and they’re allowing Arvin and his brother to go to school.

ARVIN: I like the school because I’m learning the English language. I like this language and I know I’m in a safe place. I have a question for you, after school I’d like to go somewhere to play football or join a club.
ARCHIE: Yeah, there’s loads of things that you can do. A lot of like football teams have youth teams, you know, teams for kids. We love football here, it’s our national sport.

ARCHIE: You know, what are your hopes for the future?
ARVIN: I want to be a doctor, working and treating children like my brother who have been diagnosed autistic.

ARCHIE: Oh that’s amazing. You want to work with people like your brother and help them?
ARVIN: Thank you. Or I’d like to do something like you do on TV or to be a producer.

Arvin has a right to seek refuge, but after so many countries refusing to help them the UK was their final hope. A few weeks later the British Government decided not to deport the family so their case can be investigated. And only then will it be decided if they can stay in Britain permanently. It’s their best chance yet to be given a new home in a safe country and make plans for the future.