I Don’t Get It episode 9 – Terrorism: Why does it happen? 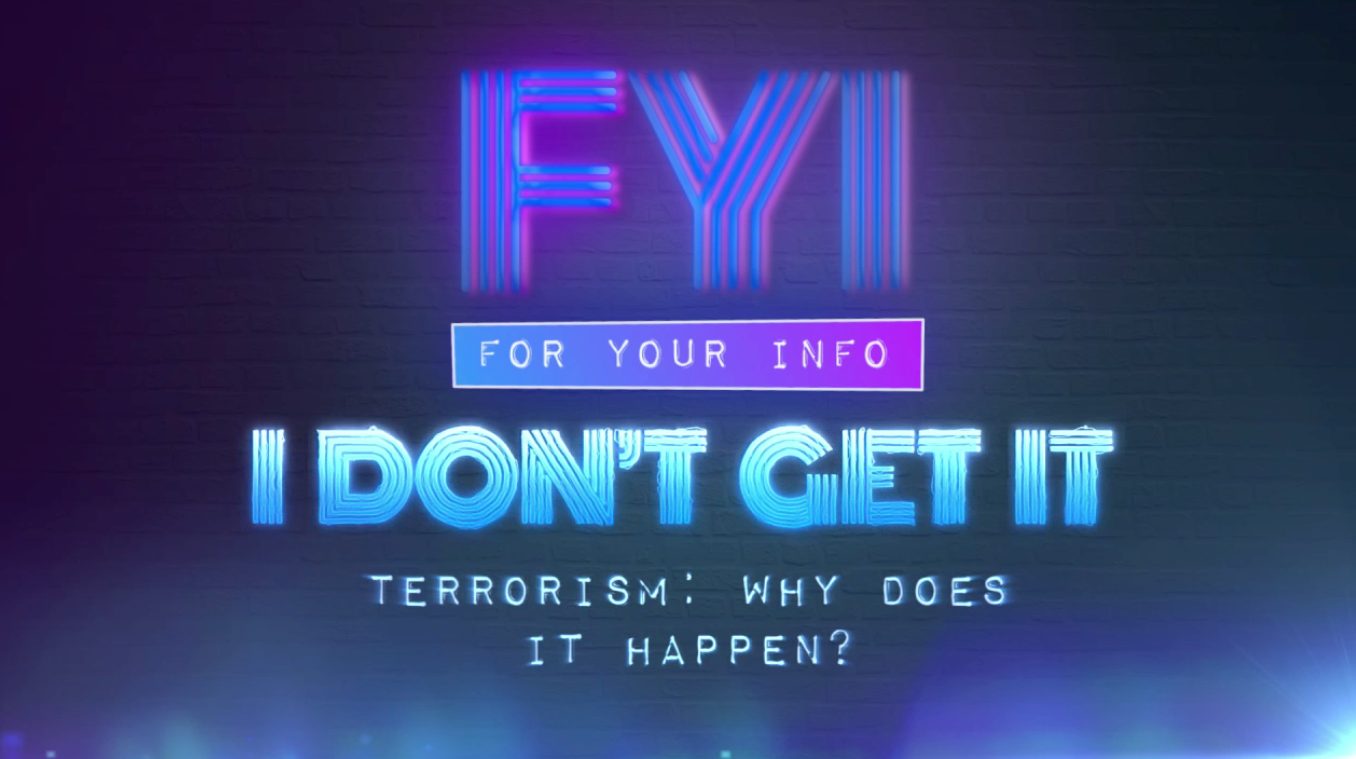 Sky Kids FYI presenter Declan investigates why terrorism happens. He asks if we should worry about getting caught up in an attack and what we can do to keep ourselves safe.

Terrorism – we’ve all heard of it, but how many of us know exactly what it is? Well, I’ve been looking into that, and here’s what I’ve found out. Put very simply, terrorism is when a group of people, or an individual, use extreme violence to try to frighten us into changing the way we think or behave.

How long has terrorism been going on?

“Remember, remember, the fifth of November, gunpowder, treason and plot.” You’ve probably heard that nursery rhyme, right? But did you know it’s all about one of the earliest examples of terrorism – right here in the UK? The so-called Gunpowder Plot happened back in 1605 when a man called Guy Fawkes tried to blow up the Houses of Parliament. But, before Fawkes could light the fuse, he was caught. The event is still remembered with fireworks, every 5th November.

More recently, there have been several terrorist attacks in London, and an explosion at an Ariana Grande concert in Manchester, which killed 22 people and injured 139 others. Many of the victims were children.

How likely are we to be a victim of terrorism?

OK, it’s completely understandable that some of us worry about this, but the fact is your chances of being killed by a terrorist are very slim. And remember, most terrorist attacks happen in dangerous countries, like Afghanistan, Iraq and Nigeria.

In the UK, terrorism is very rare. In fact just two people were killed by terrorists in 2019.

Which terrorists groups are the most active at the moment?

Most of the recent terrorism that has been carried out in the UK has been by people with extreme religious beliefs, and carry out attacks on anyone who doesn’t believe in their views. Often, they claim to follow the religion of Islam, but the majority of Muslims in the world say that Islam is a peaceful religion.

But there have also been attacks on Muslims, by far-right groups who oppose the spread of the Islamic faith. And there are concerns that Irish terrorist organisations may restart their campaign of violence aimed at stopping British rule in Northern Ireland.

What can we do to keep ourselves safe?

The police have launched a campaign – you may have heard it on tannoys in railway stations. They say that if you can remember three simple words, it can save your life: run, hide and tell. Even though it’s extremely unlikely, if you were to get caught up in a scary incident, then the first thing you should do is run away and try to find somewhere safe to hide. Make sure you stay really quiet, turn your phone to silent and don’t shout for help, because it could alert the attackers as to where you are. Then, finally, once it’s safe, you can tell the police about what’s happened, by ringing the emergency number 999.

And remember, if you’re still worried about terrorism then it’s a good idea to speak to an adult who you trust. They should be able to help you, and reassure you.