I Don’t Get It episode 8 – Bullying: How do I beat the bullies? 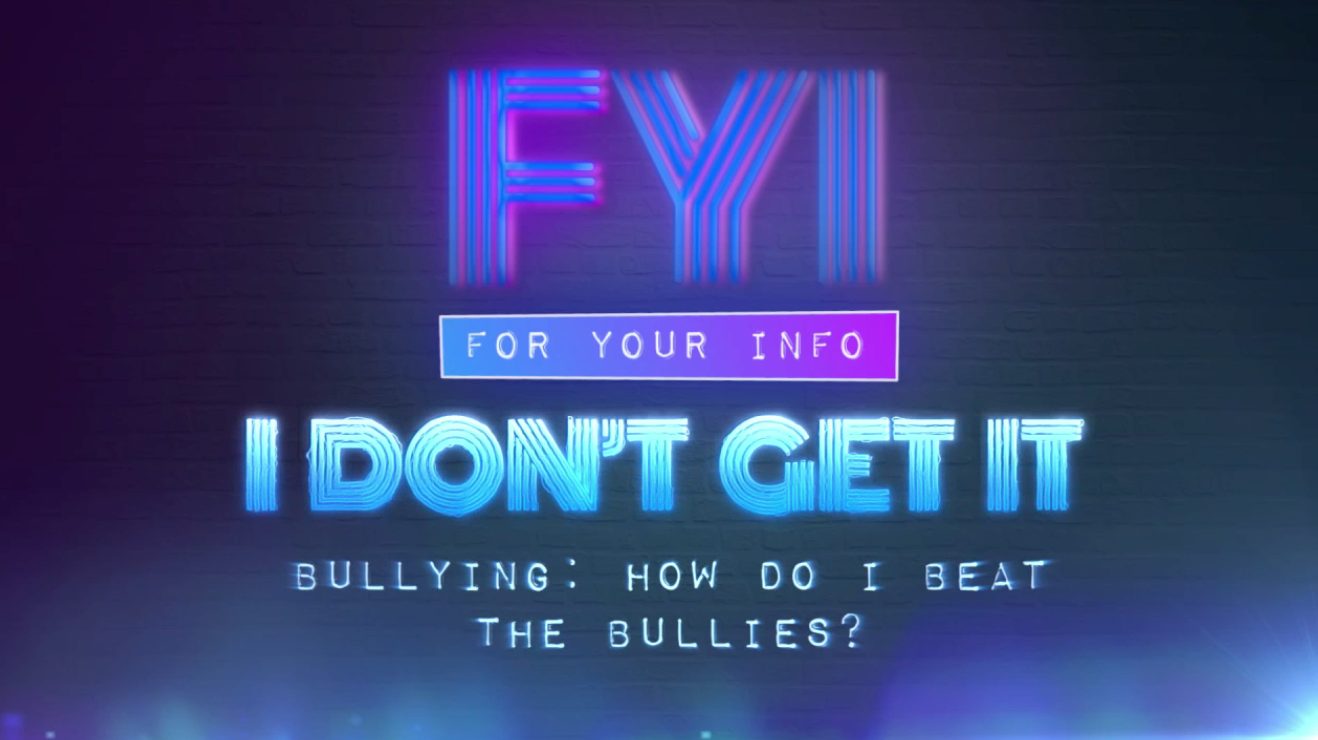 It’s reckoned that three out of every five of us have been bullied at some point. So, in this film, Sky Kids FYI presenter Ruby explores what can be done to tackle the issue.

Have you ever been bullied? If so, you’re not the only one. In fact, three out of five of us have been bullied at some point.

So what exactly is bullying?

Well, what I found out is that there are actually a lot of different types of bullying: calling us names, spreading rumours, purposely excluding us from groups, stealing our stuff, threatening us or even hurting us.

And it can happen anywhere: on the bus on the way to school, in the corridor next to your locker and when you’re using social media sites and messaging apps.

One thing I’m not sure about is how do you know the difference between banter and bullying?

Mental health ambassador Katie Thistleton says: “Well, it’s hard, isn’t it, because we all like a bit of banter, it’s good to have a sense of humour and you don’t want to seem like the one in the group that doesn’t like a laugh, but nowadays I think we use the word banter a lot when actually some of the things people are saying can be quite hurtful. So if you find that somebody’s words are upsetting you and getting you down, that’s not banter, it’s bullying. And that’s when you’ve got to do something about it. And it’s also important to remember that banter should never be about somebody’s race, someone’s appearance, their sexuality or their disability.”

The other thing I’m trying to understand is, why do bullies do it?
“Yeah, it can be really difficult to work out, can”t it? There can be lots of reasons. Perhaps the bully is trying to appear tough and cool in front of their mates, or maybe they’ve been picked on themselves and feeling quite insecure, or angry, so it can be a way of expressing themselves and lashing out.”

Why is bullying on the increase?

One of the main reasons are mobile phones – and if you’re anything like me, you’re always on them – keeping in touch with a group of friends, just with a simple message – which you can do anywhere at any time. And if those messages are repeatedly abusive, then it’s called cyber-bullying, and it can be just as upsetting as actually being picked on.

What should you do if you’re bullied? Well, here’s one idea. If someone’s sending nasty messages over a social media site, just take some screenshots or screen recordings so you’ve got a record of it, and you can probably just block them. But if they still find a way to keep on bullying you, then I reckon you should tell an adult you trust. It can be a mum, a dad or even a teacher at school.

Katie: “That’s really good advice, Ruby. And remember, you should never feel ashamed or embarrassed about the fact that you’ve been bullied. So many people get bullied – I was bullied – it doesn’t matter what you look like, what clothes you wear, how you talk – we’re all really different, but that’s what makes us really special and amazing. Be proud of who you are.”

Yeah, I get that, but what if you’re scared about telling your parents because you’re scared they are going to get angry or over-react, or even make the bullying worse? Cos you’ll just get called a snitch.

Katie: “It is always a good idea to try to talk to a trusted adult like a parent or a teacher, but if you feel like you can’t do that there are helplines as well that you can call. Childline, for example, has a free phone number that you can ring any time of the day or night – it’s 0800 1111 – and you don’t even have to give your name if you don’t want to.”

I’ve been taking a look at some of the advice online, and the problem is that if you ignore the bullying, it can start to have an impact on your mental health.

People who have been bullied can often feel anxious or depressed, and that nobody likes them. And sometimes if you don’t feel good about yourself, that can continue into your adult life.

So I reckon the best thing to do is to talk about it and get it sorted before it turns into an even bigger problem. You’ll feel much better afterwards!

There are details of organisations that can help and support on the FYI website at first.news/fyi.